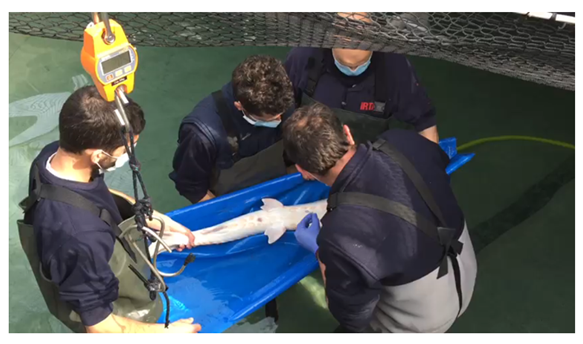 Four specimens of European sturgeon (Acipenser sturio) arrived at IRTA’s facilities on the 5th of March of 2019 after being transported during 14 hours (857km) from Saint Seurin Su l’Isle (France).

Since then, they have been occupying the new IRTA facilities: a 60m3 circular tank, following the instructions and recommendations provided by the MIGADO association staff. The temperature of the water, which is salty, is 13-14ºC. The light intensity is minimal. Their food is based on a mixture of prawn and sardines and it is distributed in two deliveries per day.

One month after their arrival in Catalonia, the four specimens were already eating properly. The behavior of the sturgeons, monitored regularly to identify their condition and well-being, is normal: all the fish have adapted well to the new conditions and no animal has been observed behaving strangely or very stressed.

In order to control their growth, body weight (Bw) and total length (SL) are measured once a year, in winter. To measure the sturgeons, the tank was emptied and IRTA technicians went in to catch them.

The figures show the changes in body weight of the four European sturgeon in the IRTA facilities; each specimen corresponds to the code of a chip (Pit Tag) inserted in its body. The blue arrow indicates the arrival of the fish at IRTA. The body weight values represent weight gain or loss at the sampling times.

The results of the first years of stay of the European sturgeons in the IRTA facilities indicate that their transport from France and their adaptation to the new conditions was a stressful episode for them, but after this period, the fish have been recovering correctly, as indicated by the body weight data of 3 of the 4 animals, since they have almost recovered the initial body weight values. Although there is one that has not recovered its initial weight yet, the trend of weight loss observed during the first year has stopped and this specimen seems to maintain its body weight.